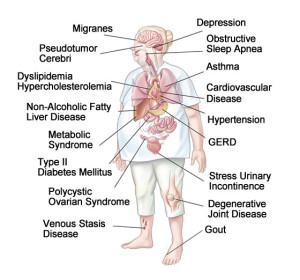 Obesity is often accompanied by other obesity related illnesses, called comorbidities. Obese people are more likely to suffer from these conditions than people of normal weight.

The most common comorbidities among obese people are the following:

Sleep apnea is a condition with which a person stops breathing while asleep. This can happen 30 or more times over the course of a single night. Sleep apnea is almost always caused by being overweight, and therefore weight loss will often cure the condition.

GERD (gastroesophageal reflux disease) also known as heartburn or reflux is a major comorbidity of obesity. Treatment is usually medical but in the case of GERD that is refractory to medical therapy, the usual surgical intervention known as nissen fundoplication tends to fail when attempted on morbid obesity patients. Therefore, the surgical treatment of reflux in morbid obese patients is bariatric surgery.

Hypertension, or high blood pressure, is significantly more common in people who are obese than in people whose weights are normal. About 40 percent of Americans who have a BMI greater than 30 suffer from hypertension; only about 15 percent of Americans with BMIs below 25 do. Consequently, if excess weight is causing high blood pressure, weight loss will most likely cure it.

Heart disease is a general term used to describe a variety of conditions that affect parts of the heart or the heart as a whole. Obesity is a risk factor for almost every type of heart disease, including coronary artery disease, heart attack and heart failure.

Some Forms of Cancer

Obesity has been shown to increase a person’s likelihood of uterine, breast, colorectal, kidney and gallbladder cancers. A recent study in the New England Journal of Medicine found that people with BMIs of greater than 40 were more than 50 percent more likely to die from cancer than normal-weight men and women.

Stroke is caused by an interruption of blood flow to the brain or other parts of the nervous system. This interruption deprives the brain of oxygen and vital nutrients, and within minutes, brain cells begin to die. Stroke is the third-leading cause of death in the United States. Obesity increases the risk of having a stroke.

Dyslipidemia is a disorder of lipoprotein metabolism, usually caused by excessively high cholesterol. Dyslipidemia is a primary risk factor for coronary artery disease. Obesity increases triglyceride levels and decreases high-density lipoprotein (HDL) levels, both of which are factors in developing dyslipidemia.

Diseases of the gallbladder include gallstones and gallbladder cancer. A recent study found that obesity increases the risk of gallbladder disease because it affects bile production, which can lead to gallstone and other problems.

The connection between obesity and infertility is somewhat complex. When a woman is extremely overweight, hormones from her adrenal gland can behave like estrogen and cause problems with normal ovulation. Obesity is also connected to a condition called polycystic ovary syndrome, which can lead to infertility.

Osteoarthritis is a degenerative disease of the cartilage and bones. Obese people are more prone to osteoarthritis because of the pressure excess weight puts on the joints.

Depression is a serious illness that involves the mind, body and mood. It includes feeling of worthlessness and despair and physical manifestations such as fatigue and chronic aches and pains. Numerous medical studies have shown links between depression, obesity and other comorbid conditions such as diabetes.